Note: The number of Champion Red Ichigo containing this chapter is the last, because the magazine is closing its doors. Apparently, the serialization of G will continue on the web, of which the next chapter is expected for October. 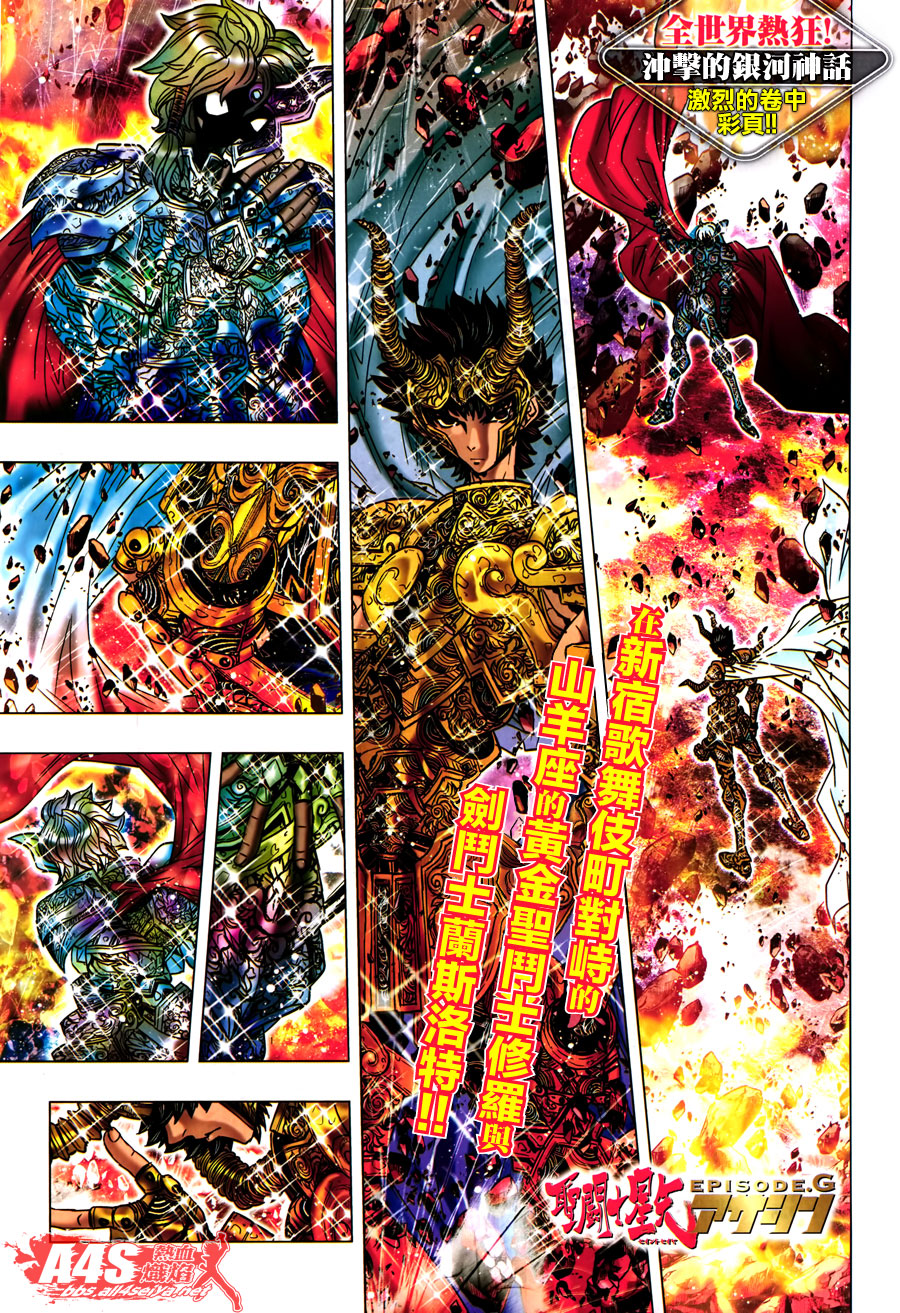 Lancelot and Shura are facing each other, ready for a fight to the death. Pregustandolo, Lancelot ride, and when the Capricorn asks him the reason for his laughter, the gladiator recalls the mythological era, in which for his infidelity with Geneva, was banished from Camelot, but for his beloved, then killed all knights of the round table, but one that now at last he finds himself in front; his king, Arthur.
But Shura replies that it is not his king, and that the face to prevent him from doing other massacres. But Lancelot goes on to say that it is very time searching for opponents to deal with, and to bring happiness to the castle, where he met with Geneva castle which now lies on the ground.
At the station, Aiolia is still with Yoshino and notanto his hunger, goes to get the instant Ramen which then warms the cosmos. Eating Yoshino asks how it is possible that she was able to see the monster arsonist Aiolia and admits that it was invisible to ordinary people, so the girl has to have a special power, a power called the cosmos. And after having explained what it is, Aiolia invites her to reach Shura, worried about what's going to happen.
Back at the square, Shura observed urban construction, fearing that it may be the castle appointed by Lancelot, but the gladiator confirmation that this is a fallacious construction, a representation of the weakness of men, and who will be there that gladiators will compete to demonstrate their powers, to prove which of them is the strongest.
Shura does not agree with this statement, for he increased power only for themselves is not worth anything, because the power exists only to protect others, this is called "justice."
But Lancelot deride the ideology of the rider, and is ready to destroy it from the beginning rider!
With all his strength, Lancelot materializes his sword, the Holy Sword Embodiment, to blend with the stroke Holy Sword Tower, creating an immense cross of light that throws Shura.
In the distance, Aiolia, sees the cross of light and witnessing the destruction created by its break with the ground. Wondering who created her, answered by the owl of Athena; to do so was a gladiator, the enemy of Shura and Athena too.
Including this, Aiolia reach the square, seeing the laughter of Lancelot mocking his king that the end was not so strong, then turn to the new knight for nothing frightened by having to deal with. But Aiolia stops him, because his opponent has not yet fallen.
From the rubble, it follows Shura no helmet and hurt, but by no means defeated, much to refuse the hand offered to him by the young lion.
Lancelot is excited to see his opponent still standing, so you can still extend their struggle. So happy, the gladiator replicates the previous attack, but this time the Shura blocks with his bare hands, and I decided to show him the value of justice, breaks the cross with its sacred sword; Excalibur.
Lancelot is both surprised and happy to see the strength of the opponent and, disappearing into a vortex, declares that their greeting is finished and promises to see him again soon.
Left alone, Aiolia holds out the helmet to Capricorn understanding what the true enemy of Athena, but when Shura tries to explain, Aiolia confirms that he remains his murderess, because this is his mission. But if these gladiators are really enemies of Athena, once defeated, the knight could be forgiven, therefore, decides to follow him, to help him in his battle in the name of Athena!

The Evil Sword of Betrayal 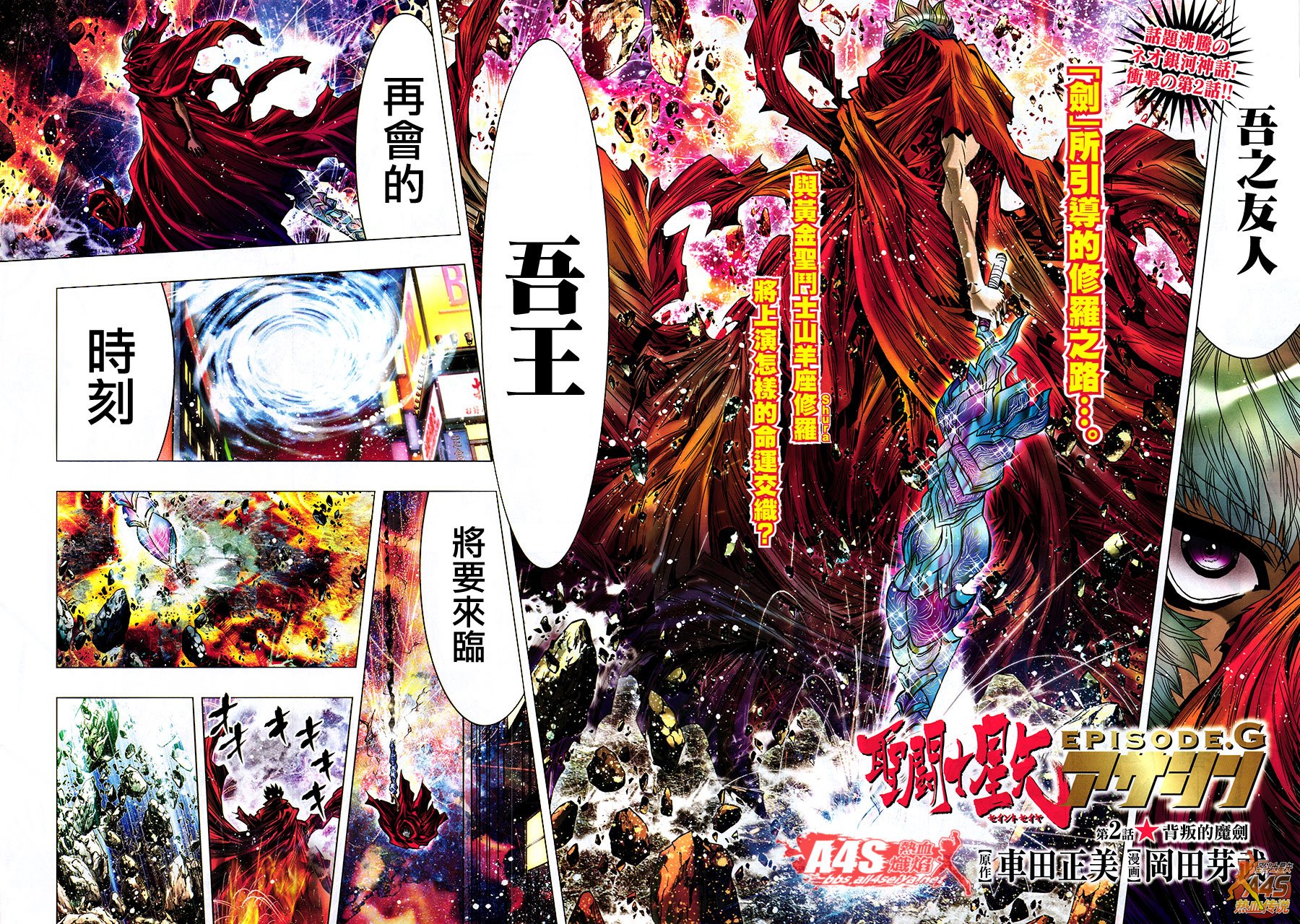 Someone moves in the Shinjuku neighborhood, looking for someone; his king.

In the station, Aiolia and Shura collide shots of Lightning Plasma and Excalibur, startling the poor Yoshino.

The two Gold continues to hit each other with no holds barred, with Shura who asks Aiolia right where he wants to go, the young Leo answers that will go to the bottom, forcing Shura to engage in a war of the Thousand Days!

But the oracle owl's shoulder Shura stops him, in fact, is not that Aiolia with the swordsman must confront, but the real enemy is at the Shinjuku district.

Shura understands and asks Aiolia until it did clear, Aiolia, looking grim, says that has until midnight. Then Shura asks him to postpone their fight, swearing on Athena that he will return to face him. But the young lion is not enough, it's about her brother Aiolos who must swear, only then will trust him. Shura nods and swears on the memory of Sagittarius and then say goodbye once mitted armor.

While moving away, Shura asks the owl if Aiolia can at least tell the truth. But the owl replies that she is an oracle of Athena and as such must remain a secret.

Coupling to the district, Shura is greeted by newcomer, which defines "his king." Shura is surprised and insists he is not the king of no one asking the man's identity. The man persists in calling him king, apologizing for the fact of having once betrayed him, because he is Lancelot, the one who wields the sword of the betrayer Arondight, which was once used to kill the knights of the round table!

Lancelot goes on to say that now is a gladiator without a master, with the sole purpose of strengthening its sacred sword, and can do so only by breaking other sacred swords, until it will remain one; her.

Shura understand where the man wants to go, and presenting as a knight of Athena again and wearing armor, is preparing to welcome the challenge of ancient warrior.

Lancelot smiles, happy to be able to start the war, but Shura insists that he is a saint, therefore only fights in the name of peace.

0
Written by yato89 in Base Crew , Episode G

We present in this article the first chapter of the new manga Megumu Okada Episode GA, followed by Episode G, which ended last year (and whose final volumes are to be published here in Italy). Published in the magazine Champion Red, the work will have bi-monthly and should tell what happened after the end of G.
As always, you can find full scans and translation on our forum

Chapter 1
The Murderess of the Assassins

In the night, in a hotel in the city of Shinjuku, one man talking on the phone with his head, scolding him of wanting to shift the blame to a corruption scandal. The man is the secretary of a political, and not have time to say more, being hit by an explosion. The explosion also involves a student who was passing by, scared to distinguish a figure cloaked in bandages come out unscathed from the fire.
Later the special squad of police arrived on the scene to investigate reports this to a hooded boy, revealing that the only clue they have is a "S" as the initial culprit. The boy, who hides a Pandora's Box, perceiving the enemy of the Cosmo, is ready to delete it.
Meanwhile, the student, finds himself in the underground, hailed by the mummy of before called her by name; Yoshino Hino.
The mummy turns out to be surprised that the girl is able to see it, existing for more than 3000 years in the form of spirit. The mummy reveals also possess the power to inflame men, which uses power as a murderess professional. Not wanting to snoop around, drew Yoshino in the deserted subway.
Luckily for Yoshino, however, a man has followed the mummy. She knows that she has been to kill the secretary being in the pay of political and, led by the owl that has on his shoulder, went there to punish him.
The mummy was again surprised, but not at all keen to get hit, he attacks with his Spontaneous Human combustion! A technique capable of causing spontaneous combustion in the body of a man to reach a temperature of 1000 degrees.
Yoshino is scared to see his savior die so easily, but the owl reassures her, because her partner is not the type to be defeated so easily.
In a golden glow, in fact, the man is freed of the flames, revealing his armor and posing as Shura Gold Saint of Capricorn!
The mummy was amazed to note the existence of the Knights, but Shura says that at the moment only follows Justice, by means of the owl his mate, that sets out the objectives to be deleted, such as the mummy, which Shura destroys with a single blow of Excalibur!
Yoshino would like to thank his savior, but Shura says that it is better if he forgets what happened, surprising newcomer.
The boy who spoke with the police, in fact, is just Came To Shura asking if you really want to let the girl go after what he saw. Shura, unflappable, says he's sure of the sincerity of the girl who will not betray him, and seeing long, asks him if he is the man that the Sanctuary has sent to kill him.
The boy replied in the affirmative, asking him why he's gone from the Sanctuary without the permission of the priest, a clear act of treason.
Shura contends that in reality he is continuing to follow the law, but he is not convinced, because he remembers the good deeds of the past Knight as the murder of his older brother. Shedding his disguise, the boy as his own armor, revealing himself as Aiolia, Golden Knight of the Lion, who arrived there by order of the High Priest to kill the traitor Shura!

Aiolia Shura Yoshino
Back to top