Mii Xiaoling and are astonished to see their old friend Katya from the priest, with Mii trying to reason with her friend reminding what the priest did. But Katya, give notice to the two silver not to intervene, says that is what they said at the Academy, but now he opened his eyes.

Xiaoling is not heard, and determined to protect Saori, pounces with his Kyokuten Shichisei Ken!

Katya para easily attack with a wall of ice, then blaming the old friend for his weakness, attacks with his Jewelic Tears!

Ice crystals imprison the poor Xiaoling in a case before it can do anything.

Katya, then, is aimed at Saori, but the Mii before you pour again, reminding the timing of the academy and what they knew of the priest in as he tries to resist his ice crystals.

Katya decides to answer her, telling her she was saved from a collision with a Dryade from a male-powerful and infinite goodness; the High Priest!

Then she realized that he is the real protector of the earth and not the girl that they believed Athena. Before Mii can argue she is imprisoned in a case of ice, freeing the way for Saori, she too begins to suffer the blow. Katya urges her to show her powers to free himself, blaming the futile job done with the Galaxian Wars. Saori does not replicate and is not able to counter the blow, agreeing with Katya when one suddenly stops; Shoko is, come to the rescue of Saori!

Further, Juan and Georg comment on what happened, sorry for the quick demise of so many girls, and mindful of the orders of the priest who wants Saori alive. George also says that she just might be the pawn of someone at his back ...

Shoko looks like saintia of Equuleus, surprising Katya which recognizes it as her sister Kyoko. Shoko is ready to help Saori but Katya urges her asking her if she really believes that she is the goddess that protects the earth. But Shoko argues that this does not matter, it has a debt to Saori who fought and suffered for her and her sister, and we will defend it. Katya does not want to listen to it and attacks it with his ice crystals.

Shoko, incredibly, is able to counteract the blow, coming to attack the saintia with his Ryuseiken.

The shot, however, is blocked by Juan. Tired of that childish fight and decided to put an end to it, the silver creates a terrible explosion inside the arena.

Shoko thinks he's a goner, but suddenly finds himself in a clearing, with Saori, and Mii Xiaoling, accepted by Mirai Shinato and explaining to them that was Mayura teletrasportarle in that place to save them, and now she will always be to take care of the enemies. Shoko is concerned about this having regard to its condition, but Shinato reassures her, the teacher was only sealing his five senses to get stronger, so it is perfectly capable of fighting.

And, in fact, Mayura comes down to the arena from his chair, raising his cosmos. Juan and Georg recognize as the person behind Saori and prepare to deal with it. But Mayura replies that she will be to open their eyes, in the role of the knight of the Peacock!

Scans and the Forum Dialogues Saori has a dream about his past life as Athena, which reigned in the sanctuary on the cavalry, but in this dream intrudes Eris, suggesting that it is useless to warn the humans because they are always in conflict, then we might as well enjoy the show from Heaven. Saori says she will always fight on their side, but the Eris laughs, because in fact his hands are dripping with the blood of the dead knights for her.

Saori wakes up from the nightmare, exhausted and pensive about his fate.

Elsewhere, Shoko is still captive of the seeds of evil in bloom thanks to his wishes. Mayura, to stop her, hits her with his technique Hisen Hajakuchôsen, with which exorcises evil. But as a result of his destiny, Shoko may still end up prey to evil imprisons her in Bangôsenseki, a rock seal of evil.

Inside Shoko suffering, wondering why they can not have desires, here skulls receive it from them, because recognize it as an evil spirit to their peers. Shoko is there and, remembering the sacrifice of his sister, he realizes that his destiny is not written, and she will do it. With these feelings in my heart, sweeps away evil spirits and gets rid of the rock.

Mayura compliments her on her own to be able to use the Cosmos, this is because you want to turn into positive conviction, that can give men a great power. Including this, even for Mayura Shoko can reverse their fate and help you do it!

A villa Kido Saori Mii cares about that looks very tired, asking if it is for the preparations of the upcoming Galaxian Wars, but Saori is not responding.

Outside the small Emony Saori looks, wanting to see the sworn enemy of her mother. Not considering it a great danger decides to pass the time by playing a little 'with her, thanks to a seed of evil that is about to bloom.

At the entrance of the villa, Jabu stopped a guy who was coming in, recognizing him as Toki, one of the hundred children like him have been sent around the world to become knights. Jabu greets him happy to see him and asked him where he got armor. But Toki did not get armor, and full of hatred for the Foundation so that it did suffer converted to the goddess Eris reborn as his ghost!

Jabu, then attacked him to defend himself, but Toki easily stands up, saying you've got a power greater than that of a saint.

Meanwhile Emony you're enjoying the show, when behind him appears Mii who discovered it. Emony does not move in the meet against a maid, but the Mii shows off his armor ready to fight it with all his might!

Discussion on the Forum

Shoko wakes up, confused, in a cave in the company of Mirai and Shinato who present their teacher; Mayura.

Mayura was a saint, but for unknown reasons it is now reduced to a vegetable in a wheelchair, being able to speak only through the cosmos by using it as a pheasant.

Mayura Shoko asks why he wants to become a Santia, and when he finds out that it is only to save his sister warns her about the power of desire. The riders do not follow personal interests, but the common good, in most desires can lead to greed and malice to it, to which she is bound to cause of the Goddess of Discord.

Meanwhile, in a temple, Ate observes Kyoko, trapped inside a big tree waiting for the awakening of Eris in her.

His little sister Emony the stop complaining about having to wait for the awakening of the mother before going into action. His brother Phonos agrees, offering to take care of the riders suffered as a gift to wake up to the mother. But Ate is of a different opinion; Athena knows that is far from the sanctuary, at that time led by a traitor, and he knows that soon a civil war will shake the armies of the horsemen, and only then intervene.

Agreeing with this, the three attend the flowering of the seeds of evil from the tree and around the world to generate new conflicts.

At the sanctuary Milo Scorpion witnessing the fall of the seeds on the world, and with him Aiolia, and both sense danger, but know they can not move without an order of the High Priest that is hard to get.

Even Saori Mii and see the seeds fall, understanding what they mean. And Mii, in addition to this concern, also expressed concerns that his partner Katya, which are untraceable.

Meanwhile, Shoko and others are having dinner, when one of those semi hits Shoko animating his dark desires to wear the armor to have the power to save Kyoko. Mayura and feels firm, warning that if they will try to attack the holy armor with his malice, will be forced to deal with it. 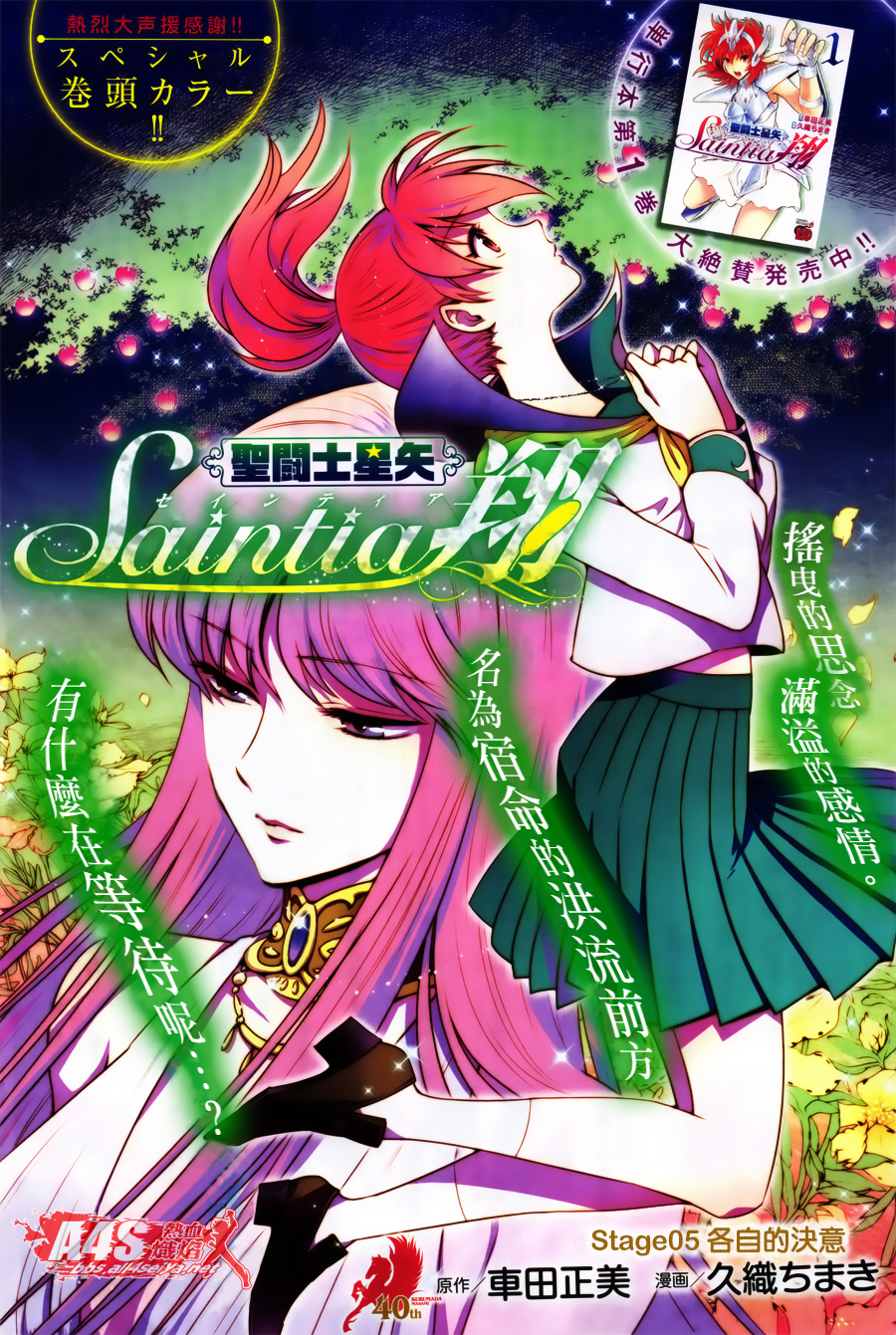 Mii's waving Shoko, decided to leave to become a Saintia. Mii sends Togakushi the mountain, where he is a master of saint and cautions; the path to become a knight is very hard and potentially lethal, more usually it takes five years to become one, while Shoko it will have to do in a very short time. But she is strong and not down, waving smiling Mii, which continues to be worried about her.

Shoko arrives at the mountain, feeling the peace that reigns there and complaining about the weight of the chest armor, Saori entrusted with the task to earn it. On the way, is surprised by two guys, Mirai and Shinato, students of the teacher that bar the way. Apparently, the teacher does not form knights and the guys do not understand how can she, not a saint, have a treasure chest. Shoko reveals that it was Saori, that Athena to give it to him. But the kids do not believe, Athena is the Sanctuary and Saori do not recognize this as such, so the attack taking away the treasure chest. But Shoko climbs the stairs where they have thrown, determined to take back what is his!

Saori meanwhile, receives Jabu, who just returned from Algeria where he got the chest of the Unicorn, ready to show his skills in the upcoming Galaxian Wars!

Even Mii, which came, Saori meets him and asks if he is one of the hundred children sent around the world. Saori nods, then revealing that there are reports of ninety of them, then when the Mii inform the departure of Shoko, she is concerned for her safety due to the enormous difficulty in becoming a knight. But could not refuse the request of the girl, because she heard that came from the heart, and this humanity can not deny Saori.

Meanwhile, at the foot of the mountain, Shoko compared with Mirai, who is determined to remove the casket denying the passage. She does not give up despite coming off again undermined by the strokes of the two boys.

More over, the temple, and Shinato Mirai brought with them a treasure chest of Equuleus, wondering if they have exaggerated with the girl, but Shinato is not worried, even a weak one has heard of the cosmos inside her, and it's certainly not have killed her while still wondering how he could have a treasure chest.

To their great surprise, Shoko came to the temple, though prostrate from wounds and, even more surprisingly, comes their teacher, decided to give a chance to the girl. Will Shoko to become a saintia?