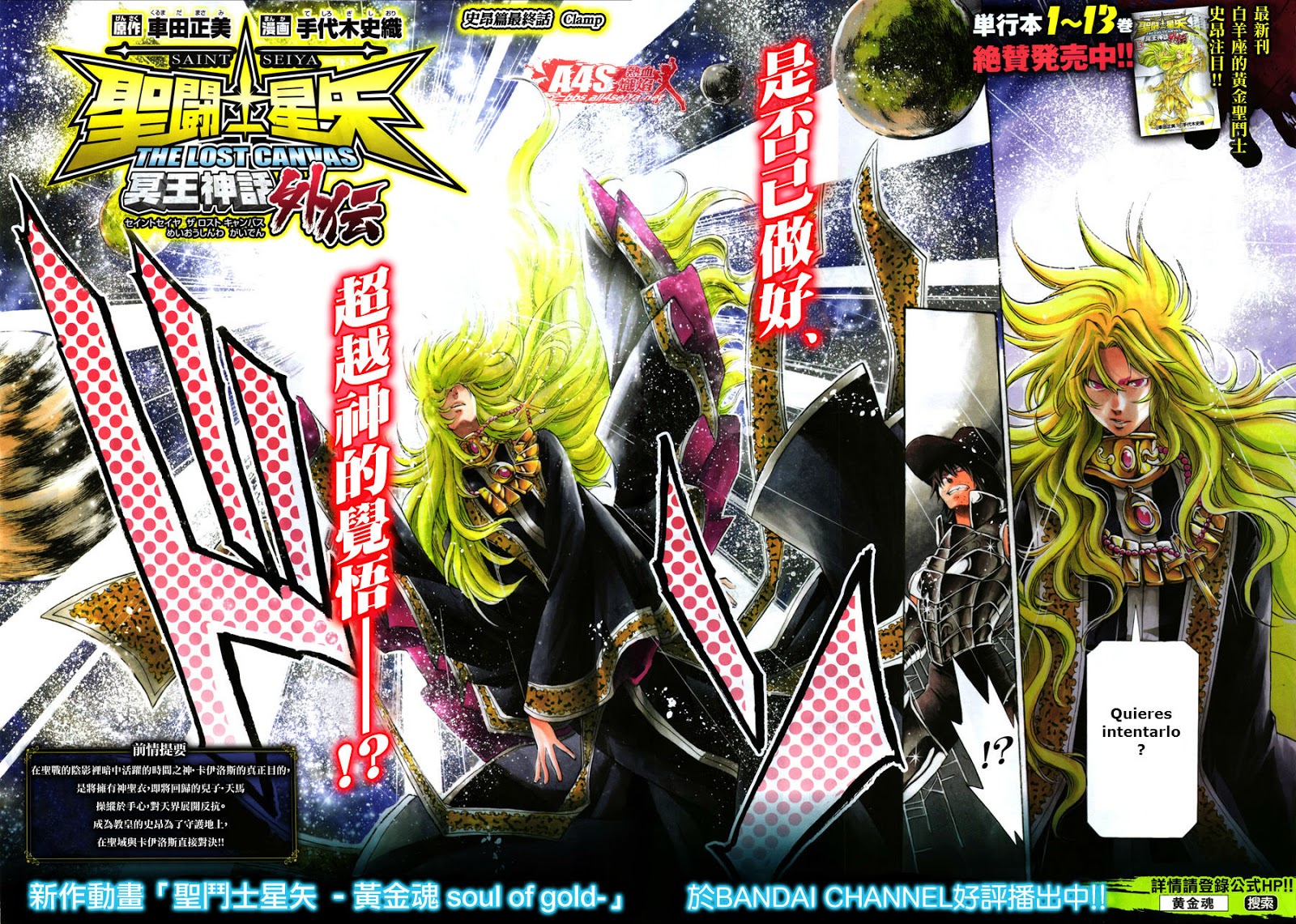 Kairos, before the High Priest Shion, which stands in defense of the altar of Athena, mocks a mere human that nothing can against a god. But Shion moves him to put him to the test, creating a powerful Stardust Revolution!
Kairos is amazed by the force of the blow, not recognizing the priest the same boy who had faced a time, unable to hit him with his black blades. Shion, flashing armor, replies that it was not for fifteen years sitting on a throne, but has been enhanced to protect what was left.
In a flash explosion, Kairos manages to block the shot just a second before being hit with Shion who compliments for his temporal powers, adding that it will try to be faster with the second attack.
But Kairos malicious smiles, confirming that after all, he is not a man. Suddenly, the universe of Kairos swells, encompassing everything; Rewind is the World, the blow able to push back the time in the environment.
Teneo, at the foot of the shrine, seen disappear Offshore Athena and then gradually the 12 houses. Concerned about the priest, approaches to his students, but also disappear. Realizing that the cause is an attack of Kairos, Teneo rejuvenates increasingly to disappear, hoping that the High Priest to save them.
Kairos, amid the rubble, laughing, strutting his power, being able to do anything despite living a mortal body.
A voiceover, confirms his words; Shion is survived by a shot from teleporting to another dimension.
Kairos is amazed that he managed to do such a thing, wondering how he did it. Shion says she has seen in the memories of the armor of Gemini, where Aspros had moved their clash in the Another Dimension to cancel his temporal powers.
Kairos, again annoyed in remembering the knight of Gemini who had managed to imprison him, says that is not the limit of his power and, still puffing his cosmos, is finally able to hit with his Shion Rewind World.
Shion, hit, he finds the rooms of the priest, with his master Hakurei and Sage which make you enter. There Shion sees all his friends, knowing that it was they who put into his hands the future, the first of which Avenir that makes me go on.
Reassured by this sight, Shion Free Rewind World before it does regress to the fetal state and attacks from a distance with a powerful close Kairos Stardust Revolution!
Kairos, fatally shot, sees his jail time and destroyed the shrine back to its original state, but also has another vision that cheers him; the return of Athena and Tenma dressed in their armor of God.
Kairos is happy to see his son deicide and invited him to join him in attacking the Heavens, so to take revenge of the gods and, why not, to review the beloved game.
The two, however, not fiatano, but Athena raises his shield in the air and the light falls upon Kairos, uprooting his darkness forever.
Shion came, which includes the shield of Athena, able to destroy all evil, Kairos has permanently deleted, so that the Shrine is returned safely.
Reassured, reviewing Teneo and its safe and sound, Shion turns Altar, now again host the statue is Athena and with his feet on the armor of Pegasus, and thanks them hoping that now they are in a better place to rest in waiting for the new Holy War, and promising them that will prepare the shrine for their return!

This month, the journal dell'Akita, Champion Red, have consumed the celebrations for the fortieth anniversary of his father's career of Saint Seiya. For the occasion, was launched a new manga "Kurumada Suikoden - Hero of Heroes" a crossover with the protagonists of the most famous works of mangaka, along with two special chapters of the spin-off the most famous, or Episode G and Lost Canvas, which There we go briefly to summarize. 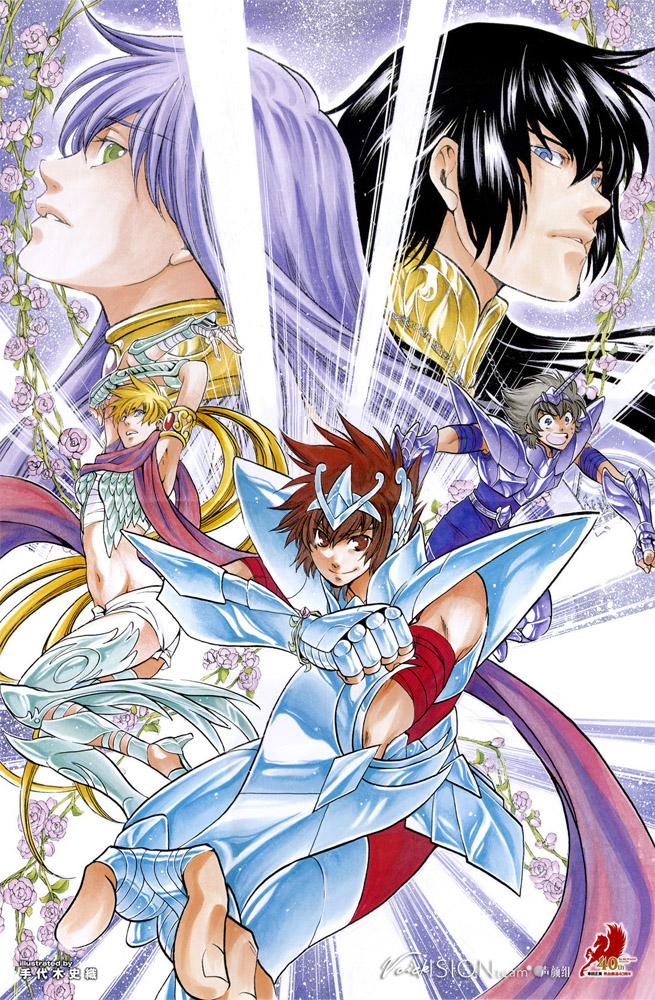 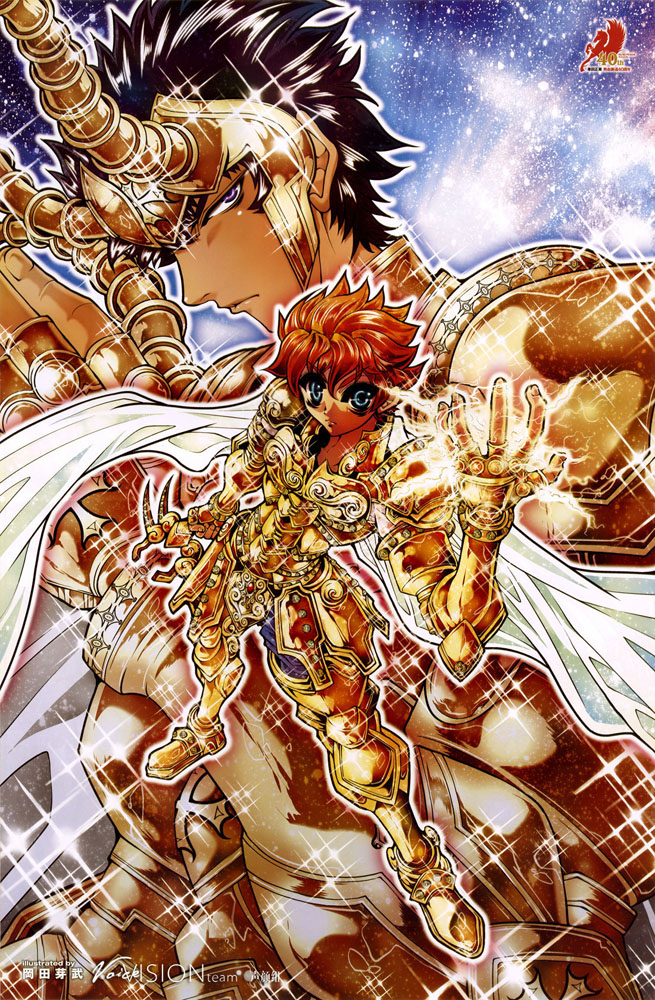 We are at a time prior to departure for the army Jamir, where Aiakos and their armies attacked the saint in defense of the Ship of Hope. Tenma rushes from Sasha, spurring it to leave as soon as possible, but she lingers watching the shrine, wondering when they will see him again. Understood this, Tenma slows, watching with her the whole thing and remembering the past moments of childhood when both fought for what they thought was right. And I'm ready to do it again, this time to save Aaron, whatever the cost!

Lythos anxiously awaits the return home of the Fifth Aiolia, who has prepared a snack. The knight suddenly appears tasting it and asking the other. The reason for this, and its absence is a mission that has just been assigned; He must go to Japan to deal with some horsemen rebelled against the Shrine ...

Play is not the kind who give in easily and is able to track down the two Gold Saints who can not see that his ability and use it to keep track of Black. Meanwhile Greedy is a choreographed visit to the Great Temple, disturbing the first meeting between Sasha and Hakurei ..

END_OF_DOCUMENT_TOKEN_TO_BE_REPLACED

This chapter ends with the third Gaiden, one dedicated to Dégel. The Shiori offered us a multitude of characters and a new setting and depth, giving us a story that has consecrated the Aquarium, has enriched the lives of background to the Sanctuary and sowed more important clues about the Holy Wars.

Follows a fairly detailed summary of this final chapter, do not read it if you do not want to be spoiled.

END_OF_DOCUMENT_TOKEN_TO_BE_REPLACED

We offer a special Audio CD released with the second season of Lost Canvas OVA where there are songs dedicated to certain characters performed by their respective voice actors. The archive contains the track list full of everything and the cover in HQ!

END_OF_DOCUMENT_TOKEN_TO_BE_REPLACED

They make me just laugh! Life has a deadline from the moment it starts. It applies to all men, there is no certainty in the future. And 'why I burn my life here and now, regardless of when it will come to its end!

We propose the Gaiden of Cardia in tankōbon format, similar to that released in Japan recently. Plus the ability to read the chapters in a single volume, this edition offers an unprecedented Chapter Bonus and extra high quality, including the pattern of the Nahual of Tezcatlipoca.

END_OF_DOCUMENT_TOKEN_TO_BE_REPLACED

Chapter 02
The Jewel of Garnet

It was during the crisis of Cardia, from Sage discover the reason for the mission to France by Dégel: Krest, his teacher, and the legendary warrior of two Holy Wars with an age of about 500 years, he has sent an appeal for help to Great Temple after going into the territories of Garnet. The Vouivre meanwhile Dégel approaches, but the two are interrupted from the assault of Lady Fraille, a widow seeking revenge. And 'the best opportunity to show off his Garnet of Small Joys ..